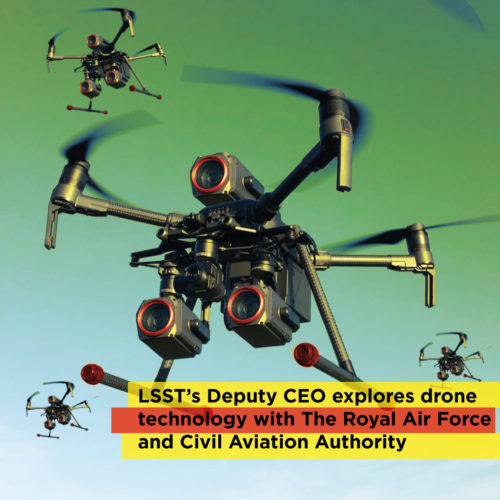 LSST’s Deputy CEO, Mr Mohammed Zaidi, emphasises that the escalating use of drones – or remotely piloted aircrafts (RPAs) – in UK airspace is causing more nervousness than excitement. Whilst businesses – across a range of sectors – are excited about a scope of drone benefits, the general public remain nervous about safety and privacy.

LSST’s Deputy CEO speaks with The Royal Air Force (RAF) – the UK’s aerial warfare force – and The Civil Aviation Authority (CAA) – the UK’s aviation regulator – about the genuine opportunities and drawbacks of drone technology. Focusing on a detailed assessment of the impacts of drones, LSST’s Deputy CEO explores the economic potential and wider implications of drones for the UK:

What research is needed to ensure that drones are used in an effective, ethical and safe way?

The UK’s use of RPAS will always comply with applicable international law, including (in an armed conflict) international humanitarian law, following principles of distinction, humanity, proportionality and military necessity. The UK’s clearly defined Rules of Engagement are formulated on this basis.

The same strict Rules of Engagement that govern the use of conventional military aircraft also apply to RPAS and targets are always positively identified as legitimate military objectives.

The UK meets the requirements to seek to protect civilians under International Humanitarian Law. UK policy includes robust criteria on establishing positive identification and requires commanders to do everything feasible to verify that the target is a military objective. UK Targeting Directives and Rules of Engagement, which are approved by Ministers, provide clear direction for commanders on this policy, which is constantly reviewed in light of changing circumstances.

UK Reaper aircraft are piloted by highly trained professional military pilots who adhere strictly to the same laws of armed conflict and are bound by the same clearly defined rules of engagement which apply to traditionally manned RAF aircraft pilots. Our professional pilots adhere to the Law of Armed Conflict and UK Rules of Engagement. The decision to release a weapon is subject to the same considerations whether remotely piloted or not. Every effort, which includes in some circumstances deciding not to release weapons, is made to ensure the risk of collateral damage, including civilian casualties, is minimised.

It should be noted that RAF Reaper (and for the future Protector) is not an autonomous system and the aircraft do not have the capability to employ weapons unless commanded to do so by professional pilots. UK military personnel are always involved in the decision to employ and in the act of releasing weapons. There is no intent within the MOD to develop systems that operate without human input in the control and weapon command chains.

It is important that regulators and industry work together to ensure drones are used safely and are safe to use.

Do you believe that RPAs will become increasingly available to journalism in the future despite the use of aerial platforms – that include helicopters and hot air balloons – not being new to journalism? It seems that ‘drone technology’ is almost as old as aviation itself.

The RAF do not use RPAS for journalism. The vast majority of our RPAS operations are for surveillance purposes – RPAS persistence provides essential intelligence contributing to the safety of allied forces on the ground.

The largest remotely piloted aircraft flying today is the US Air Force Northrop Grumman RQ-4 Global Hawk. Its capabilities are a closely guarded secret despite it having a wingspan of an airliner. Are you able to shed any light on what this machine actually does?

The RAF do not operate the RQ-4, however, plenty of information is available on this platform from open source: https://www.military.com/equipment/rq-4-global-hawk

It is not just gigantic RPAs is it? There is now a swarm of insect-sized nano-bots – somewhat ‘tech-creatures’ of the science lab. The Norwegian-developed Black Hornet, operated by the British Army in Afghanistan, is a 10cm long nano-drone weighing only 16g. But will they be so small as to ‘be exempt from all regulations’?

I think you are referring to Black Hornet, used by UK forces abroad from 2011, this was retired from service in 2017.

Drones are now being routinely used by governments all over the world and the advantages of RPAs are significant – but what needs to be done to ensure that the disadvantages are minimized? For example, drug cartels have been using drones to smuggle significant quantities of illegal drugs.

The RAF are continuing to significantly improve our RPAS capabilities by introducing the Protector RG Mk1.

The RAF Protector RG Mk1 will provide significantly enhanced capabilities. UK modifications include enhanced data links and UK weapon payloads (Brimstone 3A and Paveway IV). Protector is considered a technological step-change with regards to RPAS capability, delivering unique intelligence gathering capability and increased endurance. The Protector is designed with anti-icing and lightning protection ensuring an unmatched ability to operate in adverse weather conditions and is also the world’s first RPAS to be designed, built and certified against stringent NATO and UK safety standards.

The aircraft will contribute to Homeland and global Defence tasks across the spectrum of operations, including but not limited to, military aid to civil authorities (search and rescue, disaster monitoring or flood prevention activities), and armed intelligence, surveillance, reconnaissance and target acquisition at long range and for long periods until beyond the mid-2030s. The UK is also heading European efforts to enable seamless integration of RPAS within civilian airspace through close involvement with the CAA.

Enforcement powers need to keep pace with technological development. Legislation has already been introduced to tackle the misuse of drones. That legislation will need to be kept under review to adapt to new challenges.

While our definition of drones is typically limited to unmanned vehicles, certain forms of autonomous transportation should be considered as ‘drone transportation’ too?

Regulators across the globe are focusing on the development of urban air mobility vehicles (manned and unmanned). Regulations will need to be introduced to oversee this emerging technology.

In 2018, Gatwick airport was closed for three days straight. The pandemonium was caused by disputed ‘drone sightings’. Hundreds of flights were cancelled and innocent people arrested. The end result was the introduction of drone detection systems in the UK – will this be enough to prevent intentional attacks on airports?

A small team of RAF personnel were deployed to Gatwick Airport in response to a request from Sussex Police following reports of repeated drone encroachments to the airport authority airspace. The military support was requested and provided under ‘Military Aid to Civil Authorities’ (MACA); the RAF continue to stand ready to assist the Civilian authorities if and when requested. Responsibility for investigating the sightings and security at Gatwick Airport fell to Sussex Police and the relevant airport authorities. Further information relating to events at the airport should be sought from Sussex Police.

The police are responsible for ensuring the security of UK airports. Legislation has been introduced to tackle the misuse of drones close to airports.


LSST’s marketing team would like to thank the generous time and support from The Royal Air Force and Civil Aviation Authority.

LSST students, join the debate and comment below. What are your views on drone technology? An opportunity or threat – or both?

Please email the author of this article kunal.mehta@lsst.ac for any questions or comments or to find out more about the work of The RAF or CAA.

Regarding this webpage, is there anything you liked, disliked or wish to comment on?
Our website uses cookies to collect anonymous information to enhance your experience. By continuing to browse our website you agree to our use of cookies. More details
Top